Mountain Skills believes that continuous education for its guides is paramount. Our employees are American Mountain Guides Association (AMGA) certified instructors, New York State licensed guides, First Aid, CPR certified, and as Leave No Trace trainers. We also hold regular training for our guides, so they stay up to date on company policies and new methods for client care and coordination – we want to ensure that each one of our instructors provides you with a memorable and enjoyable experience!

Moreover, we are committed to our community. Our instructors actively support efforts to open more climbing opportunities in theMinnewaska State Park Preserve by participating in rare plant and animal studies and assisting in the removal of invasive species. We also train yearly with NYS DEC and Mohonk Preserve rangers on High Angle Rescue.

Mountain Skills Climbing Guides are true Gunkies: most of us live locally and climb daily in our beloved Gunks, Adirondacks, Delaware Water Gap and Catskill Mountains. A Michigan native, Doug’s fascination with the mountains and the outdoors began with a competitive skiing career in high school. Doug discovered climbing in 1997 while living in Boulder, Colorado and has owned and operated Mountain Skills Climbing Guides since 2008. In 2002, he began guiding and climbing full time at the New River Gorge in West Virginia. Doug has climbed extensively throughout the United States, he primarily spends the warmer months guiding rock in the Gunks, the winter months guiding ice in the Northeast and the shoulder seasons in sunny Red Rock, Nevada.

Doug has volunteered with the NYC Adaptive Climbing Clinic helping to teach rock climbing to people with physical disabilities at Brooklyn Boulders.  Doug was formerly on the Board of Directors for the Gunks Climbers Coalition, an advocacy group dedicated to creating and maintaining sustainable opportunities for responsible climbing along the Shawangunk Ridge and surrounding areas.  He also recently worked with Exum Mountain Guides in the Tetons, WY during the summer months.

With a background in fine art from Kendall College of Art and Design, Doug paints landscapes in large format of the locations he guides with oil color on canvas.  You can view Doug’s paintings at www.dougfergusonpainting.com 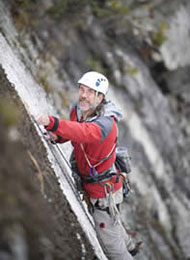 Chuck Boyd has 25+ years of climbing experience around the world. He has climbed Mt. Everest and attempted other 8000-meter peaks (K2 and Broad Peak). He has also had first ascents on Shipton Spire in Pakistan (1996) and the East Face of Cayash in Cordillera Blanca, Peru (1983). 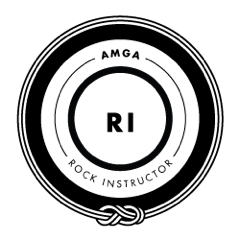 Mark has lived in the Hudson Valley and climbed in the Gunks since 1999. While living in New Hampshire, he climbed many peaks in the White Mountains, Catskills and Adirondacks. Mark has climbed in Joshua Tree in California, many routes at Red Rocks in Nevada, and Red River Gorge in Kentucky. In winter, Mark enjoys back-country skiing, snowshoeing and trips to warmer destinations. He is also an avid caver who has explored and mapped caves throughout the United States and in several foreign countries. Mark studies natural sciences including geography, ecology and geology. A volunteer with several regional, non-profit and state climbing-related agencies, Mark supports protection of nature as well as climbing resources. Anyssa has always loved the outdoors and fell instantly in love with climbing in 1995 during a kayaking trip in Maine that included a day of rock climbing.  Since then, she has climbed in New York, New Hampshire, Nevada, Colorado, Utah, Canadian Rockies, Kentucky, California, and Chamonix.  She is also allured by the challenge of the alpine world and has summited peaks including the Eiger and the Matterhorn.  She is a firm believer that nature is the perfect way to learn about yourself, heal your soul, and develop ways to grow inside.

Anyssa is the owner and founder of Genuine Climbing, dedicated to helping women climbers gain confidence by teaching them how to overcome self-limiting beliefs, get stronger and live an empowered life through climbing.

Anyssa is a mother of three kids and understands the delicate balance of raising a family and following personal dreams.  She hopes one day they will collide when she and her son climb a big wall in Yosemite. Born and raised in the ‘burbs of Southern Jersey and relocated to central New Hampshire at the ripe age of nineteen, Andrew quickly fostered his relationship with the local crags and mountains. Cutting his teeth on the bolt-laden routes of Rumney’s steep, schist test-pieces and honing his mettle amongst the granite labyrinths of Cannon Cliff, he found himself with an unshakable desire to climb for life. He began his apprenticeship as a guide while also pursuing a bachelor’s degree in Adventure Education. Having finished college in 2017, he has since pursued work as a full-time rock and ice climbing guide, traveling all over the States in pursuit of “The Life”. He appreciates black coffee, peppermint tea, and fancies the idea of having cookies for every meal. Always passionate about the outdoors, EJ spent the formative years of his climbing career exploring the White Mountains of New Hampshire. Since 2013, he has gained experience on numerous rock types and in areas including the Gunks, Franconia Notch, Linville Gorge, Red Rock Canyon, the City of Rocks, the Cascades, and Squamish.

EJ loves the mountains, and spends the warmer months on rock, the winter on ice, and the wetter seasons paddling hard whitewater. He is a certified AMGA Single Pitch Instructor; AMGA Rock Guide Course, Licensed New York Tier I Rock Climbing Guide and Tier II Ice Climbing Guide; a Wilderness First Responder; and an ACA Level 3 Kayaking Instructor. In addition, he has several years of experience as an instructor at a climbing gym in Fairfield, CT. Though well-traveled in the western climbing arenas, Jeremy is happiest when clinging to the side of a cliff in New York State. A Gunks climber and Catskill ice climber since 1989, Jeremy grew up in the gorges of Ithaca and recently co-wrote and published Adirondack Rock: A Rock Climber’s Guide. He has been guiding rock, ice, alpine ascents and backcountry skiing since 2002, and finds that the personalized instruction of guiding is the best way for a client to get immediate feedback and quickly improve their skill set. Tim began climbing at an indoor bouldering gym in upstate New York in 2011. Later that year he began climbing outside; trad climbing quickly became an obsession.  He began climbing on slab and cracks that are prevalent in the Adirondack Park as often as possible.  Now, Tim enjoys pushing his physical and mental abilities in the Gunks.  In his spare, time Tim enjoys cycling in New York City where he teaches a high school engineering course.  Tim is a certified American Mountain Guide Association Single Pitch Instructor as well as a licensed New York State Rock Climbing Guide.  Most of all, Tim enjoys sharing his love of rock climbing with others. Ross Ayer was raised in Connecticut and started climbing when he was a young teen. He immediately fell in love with rock climbing, trying all of the disciplines. He has continually grown to love sport and traditional leading but can be found on the occasional boulder. Ross is particularly fond of the crags tucked across Connecticut, but also enjoys the Gunks, Rumney, and Horseshoe Canyon Ranch in Arkansas. He seeks to continually learn more about the sport. Ross is a certified Tier I Rock Guide in New York. He holds both a CWI Lead and an SPI certification with the AMGA. He is also Wilderness First Aid and CPR certified.
He has been a route setter at indoor gyms since 2016 and occasionally climbs in local competitions. Ross has a great passion for bringing new climbers to the
outdoors. He is the founder and president of ClimbFUS, a collegiate climbing club.He enjoys working with those who have a fear of heights, as he embraces a
“Respect for heights” himself. Ross also loves many other outdoor pursuits like
fishing, kayaking, and photography. He hopes to see you at the crag! Matt developed an appreciation and love for the outdoors during his years as a Boy Scout. He conveniently blames his passion for climbing as the reason he never earned his Eagle Scout award.

Spending his college years in New England exposed him to a variety of climbing styles. From bouldering in Lincoln Woods, bolted routes in Rumney, traditionally protected crags of Franconia, and the higher alpine terrain of the White Mountains. Matt is a well-rounded climber who takes full advantage of the time he’s afforded to climb and adventure. He considers the Gunks home, has and continues to travel to notable points West, but loves winter ascents of Wallface in the Adirondacks the most.

Matt also holds a B.A. in Culinary Arts from Johnson and Wales University and loses his mind when hot food turns cold. Bobby started rock climbing at the age of 16 in the Gunks and the Adirondacks. Following his passion for adventure sports, he attended SUNY Plattsburgh where he received a M.S. in Expeditionary Studies. Bobby is now the Outdoor/Adventure Education Coordinator at Paul Smith’s College. His passion for the outdoors expands beyond climbing. He loves to spend time in a boat, costal or whitewater paddling and on skis in the mountains. The aspect he enjoys most about the outdoor industry is the people he gets to meet and the area’s he gets to travel to. Bobby lives in the heart of the Adirondacks with his wife, dog, and hedgehog whose name is of course Sonic.